Carbide #2 and #3 - Carbide #1 (not pictured) is a donor buggy and in its way to the scrap heap once it’s ‘organs’ have been donated. #3 is Normally ridden. Geared for torque- had recently re-done top cylinder but still showing low compression- Valve lash looked good. Surprisingly found TDC isn’t at the two hash marks- It below! (Granted, also based this on putting the piston at true TDC. I.E when piston is at its top most position) Bought new 155cc kit. Will probably get to that this summer. #2 is driven mostly by the brother in laws.

Manco710E was a project. It runs but finding parts for Subaru engines is getting hard and when I do, quite expensive.

Yea so those are my personal ones besides the few customer buggies I get in the shop occasionally. 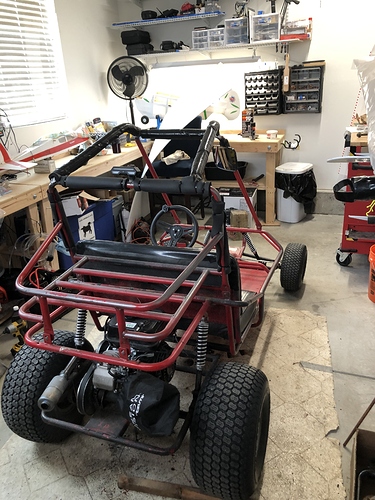 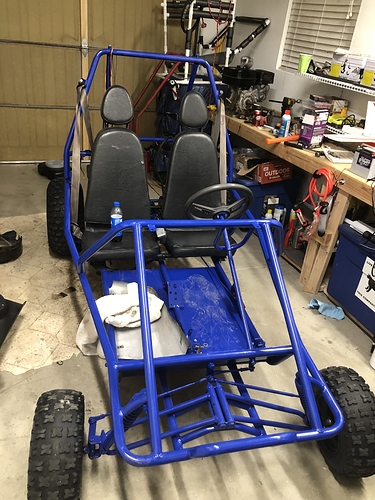 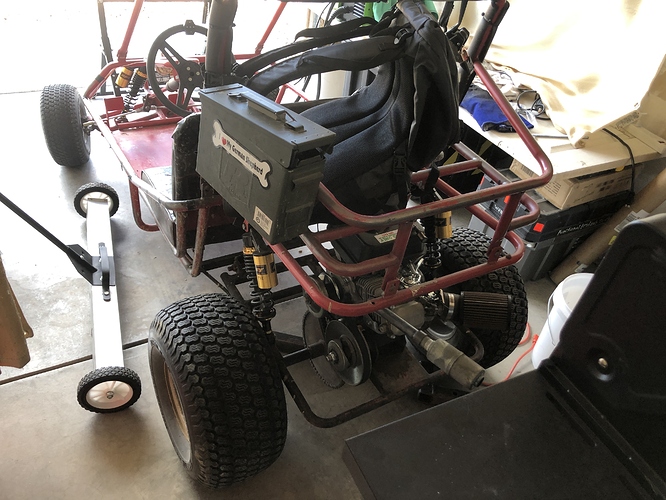 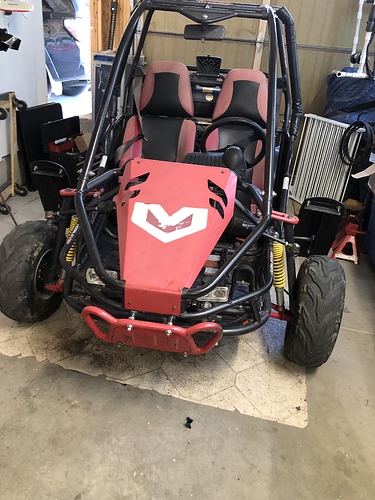 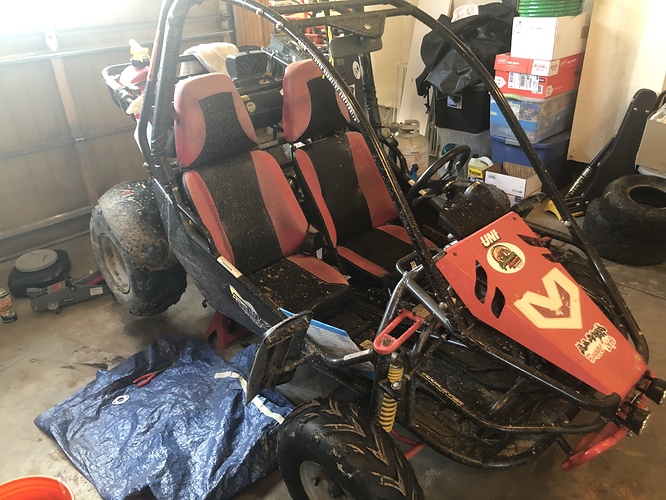 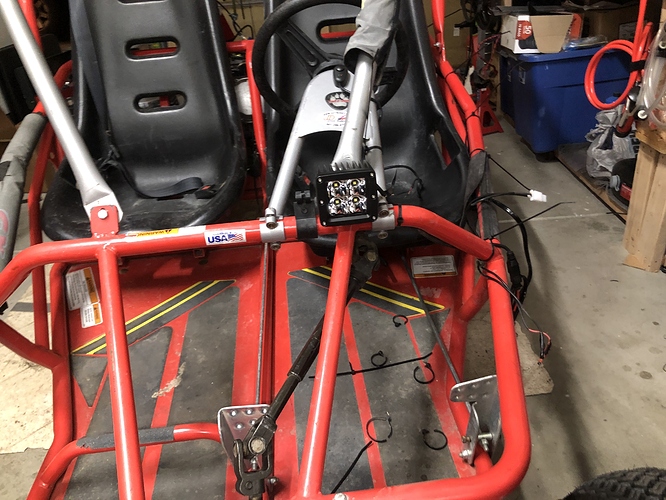 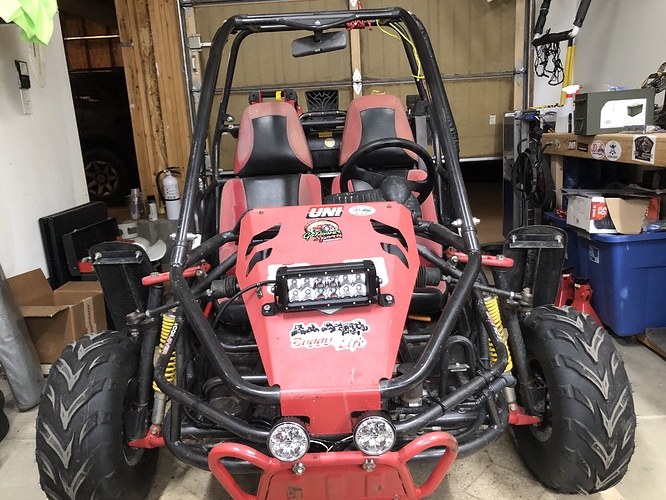 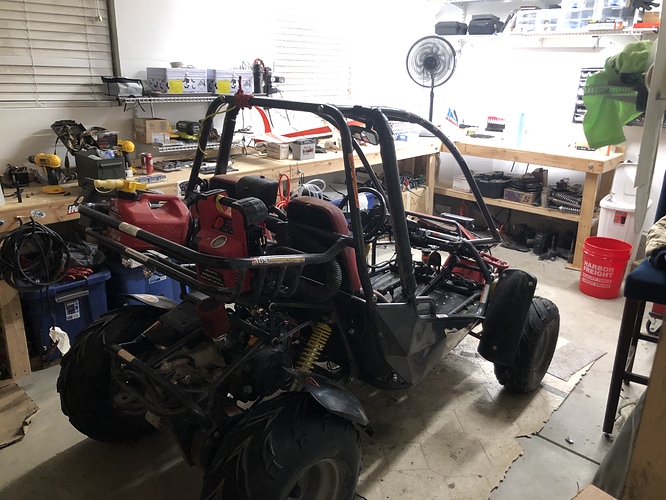 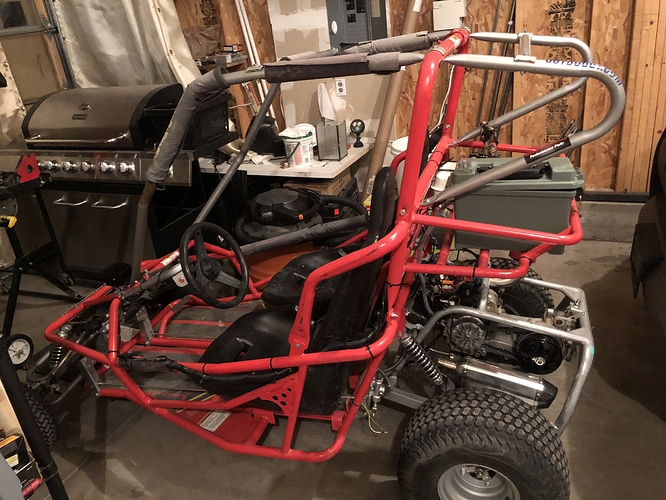 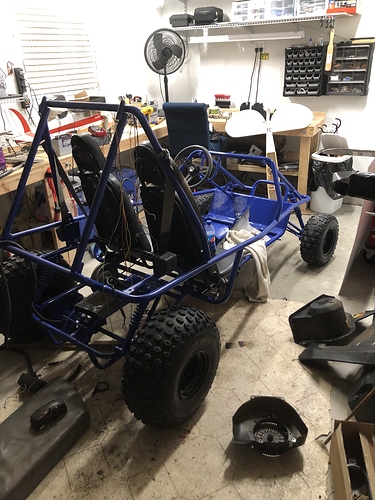 You’re building up quite a bug collection!

Will Carbide #3 be getting nEFI first?

Yea Carbide #3 will be getting it first. It’s the ‘trail rider’ of the bunch. Still experimenting with the right sliders. Took the 12gram sliders out two weeks or so ago and put 10 grammers in. Since it’s larger (58.7 or 58.9 — I believe). Naraku cylinder head was installed and valve lash checked, I was only able to drive it around the block for a short while. The winter weather here lately has made it difficult to get it to the back-40 and do the prairie riding. Maybe on Saturday I’ll try.

Compression was low- but the cheap compression kit Could have been the issue also. I couldn’t use the 10mm (believe) spark adapter as it leaked horribly so had to use the ‘rubber nose’ and long neck adapter that cam in the kit. Initially I forgot to pin the throttle al the way open so only got around 75 psi BUT. j caught that and pinned the throttle open and psi’ jumped up. Motor only has 378 miles on it.

The piston and rings actually looked pretty dang good. No defects noted so I sent back the compression kit and looking for a new one made by ‘Posse’. Could really have been a bad compression kit. We’ll see. But I should be able to tell with larger head, if there’s real improvement after I get it out for a good long drive. The small drive I did take, I could tell there was a good improvement being the intake and exhaust ports are larger. It did breath better for sure.

Jetting is good so far, little rich but I’d rather have that than lean.

So if after a good test (and good compression kit) I find compression down, I’ll just rebuild to a 155cc set. It’s sitting on the bench now just waiting. If compression test turns out good. I might install on the spider.

Going to remove the pneumatic petcock and Install a on/off instead and cap off the extra port to the cylinder head . It hasn’t had problems yet but it’s a potential issue down the road if not taken care of.

Carbide #2 is pretty much bone stock but with a new shotgun exhaust, uni, jetting and 39 tooth axle sprocket. It runs fine just isn’t the everyday rider. For the family when they come out.

3203 is in storage- been concentrating on the Gy6 buggies. Runs like a champ though.

The manco is … sigh… a pain. It will be sold probably.

Spider needs some work on jetting. Great running until wide open- it shutters back and forth. No air leaks at this time though. Top end was rebuilt the other year. Just being temperamental. Needs a new fuel tank installed. Might get that done Friday.

So yup- Carbide #3 will get nano installed

You’re on the right path with the 10g rollers, they’re my go-to recommendation if you do mixed riding.

What did the compression read after opening the throttle? I’m with you on the possibility of a bad tester, threw one away myself not too long ago.

Going to remove the pneumatic petcock and Install a on/off instead and cap off the extra port to the cylinder head . It hasn’t had problems yet but it’s a potential issue down the road if not taken care of.

The automatic units are a pain. Once you go manual you’ll never look back.

Spider needs some work on jetting. Great running until wide open- it shutters back and forth. No air leaks at this time though. Top end was rebuilt the other year. Just being temperamental. Needs a new fuel tank installed. Might get that done Friday.

What jetting do you have in the carb? Are you super sure the intake manifold isn’t cracked? They can be sneaky sometimes, especially where the aluminum/rubber joins around the nuts.

So yup- Carbide #3 will get nano installed

Once I opened the throttle, psi rose to 115,120 psi. When I decide to to get a new compression kit I’ll re test. Rings and piston look fairly good. Slightest bit of wear on the oil rings - very slight. Piston showed no indication of valve slap or irregular wear.

On the spider it’s currently a 130 main and #35 I believe on idle jet. With the Uni, and BD exhaust it needs to breath better. Plug is fine. Brand new intake, spacer etc. (both taken off and inspected , no issues). I put new hoses on all the way around once a year. But Inhavent chances the valve lash- slight possibility that it’s a valve timing issue—- but not likely.

Pretty sure I have a jetting issue. Haven’t spent an enormous amount of time on the spider as I’ve been working on the carbides and some other folks buggies as time allows. Will concentrate more in the spider when summer rolls around most likely.

At what elevation do you typically ride? 130 is a bit fat. With a free flowing intake and exhaust you’d normally be looking at a 125 at sea level. 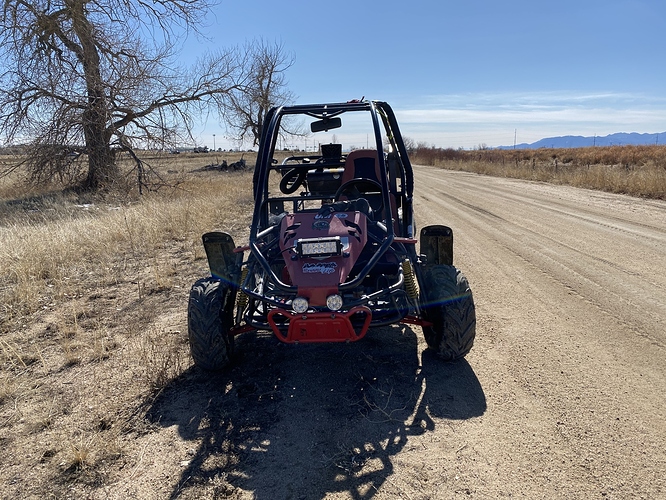 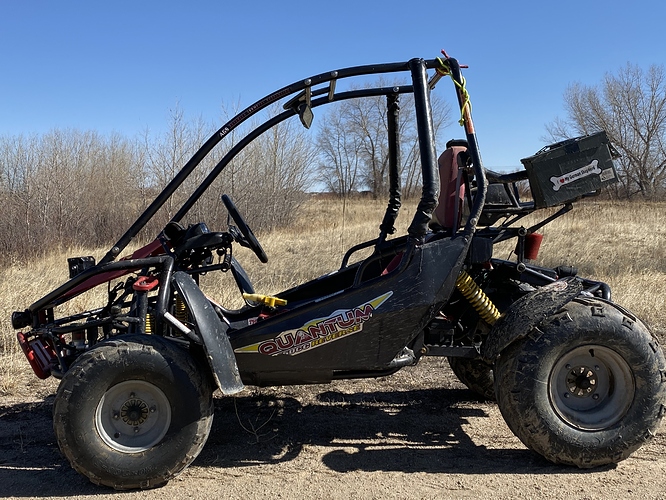 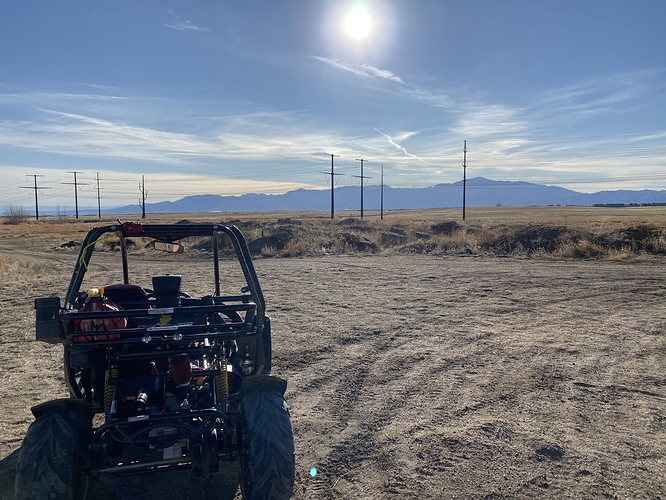 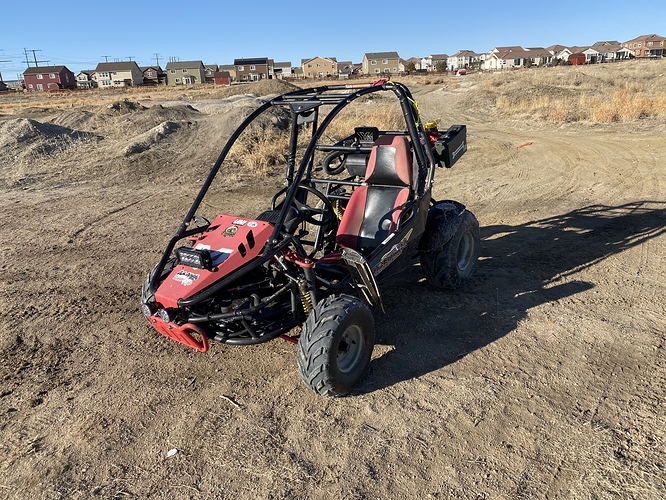 Went from 120 main jet (wasn’t 130) to 115. After the 159 head install I was surging at WOT. Went down a jet size and all is good now. Still need to get a decent compression set to re-test compression. Still debating I. Dropping in the 155cc I received the other day.

Well removed the vacuum petcock and installed the manual shutoff today. Began to have idle issues. Would die/quit giving it short bits of throttle.

So I Re-did the air/fuel mixture and after several attempts was able to get it to the point where it ran well when ‘bumping’ the throttle. Been driving it back and forth to the shop, trail, shop, trail … all day. Having issues at WOT range where I start hearing the exhaust pop intermittently. Now with the exhaust I have, its called a ‘shot-gun’ exhaust. It has a loud rumble to it. So on when taking foot off the throttle, it rumbles while whining down… so it can be difficult to differentiate between popping at ‘whine-down’. Pretty certain its the exhaust. But for sure at WOT- there is a popping from the exhaust (with 115 main, #35 idle jet) . Consulted with some folks, was told it was too lean at 120. Spark plug looks ‘decent’ (probably still too ‘white’ on the center ceramic electrode in my opinion)

Not sure I am in love with the 10 gram sliders though. Maybe I should try rollers instead. There is a difference in opinion for sure on which one is best. ( I went from 12 gram to 10s two weeks ago) She will ‘get up’ a good size hill but still very boggy. (Also have a 39 tooth main axle sprocket) On a long stretch, GPS speedo will max out around 33-35 MPH. Not looking for speed on #3, looking for ‘grunt’ / ‘torque’ getting up hills and on the trails. Would like to spin the tires lol. When I do get into sandy spot though, thing really needs to rev up in order to turn the tires. It gets free but definitely a lag.

It likes to idle between 1700-1800 rpms. There is some debate on whether one wants idle between 1600 RPMS and at 2000’ish RPMS , it reached the power band . Some have said since I am idling high anyways that I am loosing torque due to the wasted RPMs. Not sure which is right.

At WOT the tach stays at 73-7800 RPMs. Never have seen the RPMs get any higher than that. Going to purchase the large, blue, metallic CDI. Only have the orange ‘performance’ ones. Thing is there is no way of knowing for sure if those generic orange CDIs are actually performance.

So yea- tad disappointed with #3 today.

That’s going to be one of the benefits of nano- it calculates for us!

So I Re-did the air/fuel mixture and after several attempts was able to get it to the point where it ran well when ‘bumping’ the throttle.

removed the vacuum petcock and installed the manual shutoff today. Began to have idle issues. Would die/quit giving it short bits of throttle.

After installing the new manual petcock, did you remove the tee and open vacuum line that previously ran to the vacuum unit? Might seems silly, but I’m known to have done similar in the past

Can’t be a coincidence that you’re having mixture issues after installing the petcock.

Running good now… so far. Compression on both carbide # 2 and 3 are in the 175 psi range. Healthy engines compression-wise. 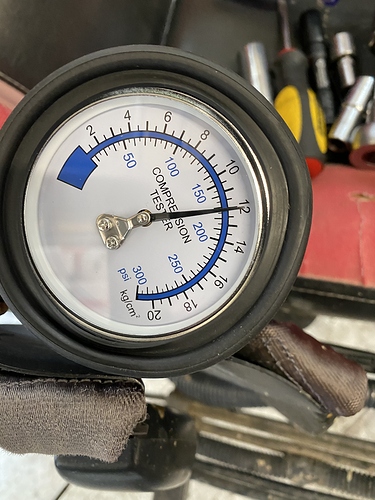 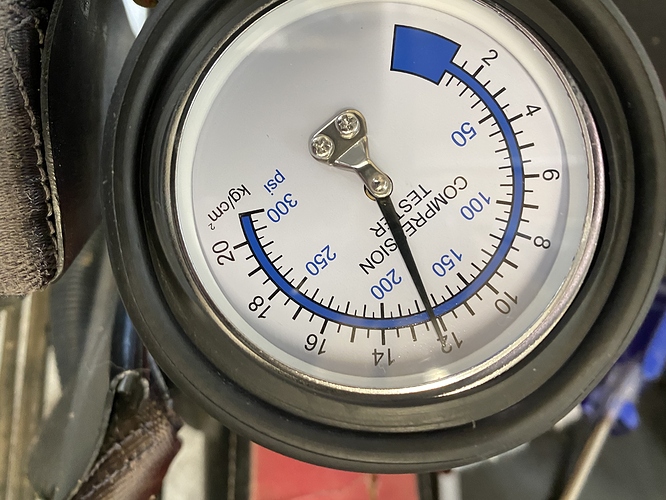 Awesome numbers. What did the problem turn out to be?

Well I think it was a combination: intake valve lash was too loose. Air filter was dirty, carburetor needed cleaning/soaking. Spark plug gap was gapped back to .26. Spent a half hour re-doing the entire carb timing. Reinstalled the 115 main jet and #35idle jet. So I’m not positive what the issues exactly was because I messed with so much 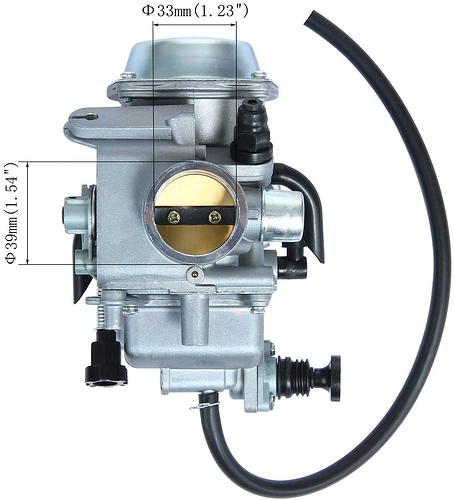 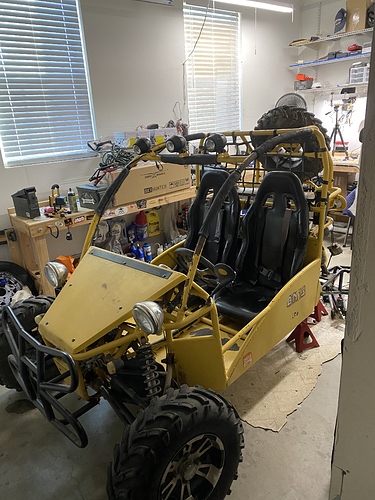 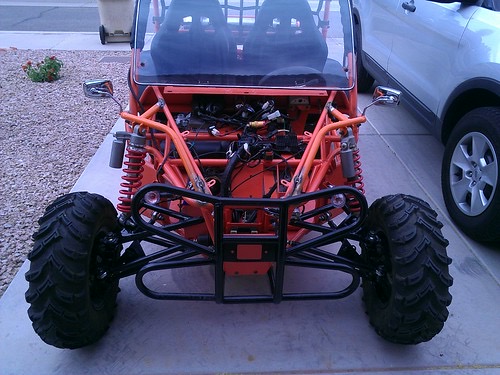 Had our semi-annual buggy outing in CO this past week. Quite a few larger BMS buggies showing up. Mine is the yellow one (in the shop this AM, undergoing needed rear diff repairs)

Looking forward to NANO progression and getting to throw one onto both my 400cc bad boy and the GY6s’ - I know quite a few CO/ regional folks are waiting too!