Well, it is probably about time I introduced myself.
My name is Al, am one of the mods around here to give Trav a hand with things, have been following his nEfi project for a couple of years.
I am a qualified auto electrician, working in the mining industry, predominately in the underground heavy fleet, on loaders and trucks that weigh around 60 tons unladen.

During my time off of work, when not being harassed by the wife and kids, I like to fix/repair/modify, I cant help myself, standard is for chumps.
Manufacturers have to build things to meet emissions and noise standards, maximize profit, etc.
Tech has advanced a long way since some of the machines here were built, parts (IE carbs) have worn, and some parts might not even be available anymore.

I was living in Mt Isa, North West Queensland, Australia, with a tropical to sub tropical climate, which would vary from a dry winter to a hot and humid summer, so air/fuel ratios would be constantly changing.
At the end of 2019, I moved back to Adelaide, in South Australia, where the climate is totally different (Cold wet winter, hot dry summer)
I was looking around for an efi system, that would fit relatively easily, and be reliable, I came across a couple, but they just seemed ‘clunky’, with the possibility of being unreliable and not really fitting the bill.
I started to rebuild this bike, and got a larger carby for it off a 500cc, but then came across the nanoEFI while still in its early stages.
The engine has been rebuilt and is now a 425, hence the bigger carb.
Bike is kickstart, but I have got a AA battery pack to fit to it, as this would help smooth out any voltage fluctuations it had, ie at idle.
Now that nanoEFI is coming along, it will double as a power source to power the fuel pump for priming and power for the EFI controller.
Another upgrade is a fully wound stator and new rectifier to cope with it.
The bike is pulled down, as I was living on the other side of the country, so it will take some time until it is reassembled.

The sad state it looked in when I purchased it cheap off a mate. 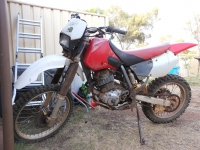 My aim is to build it to look similar to this. 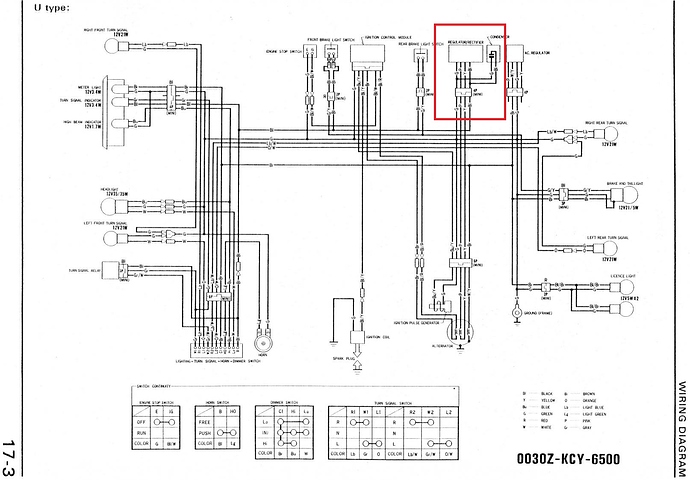 Wiring diagram for Aus models, not sure why there is a red box there, but I will also add an ignition key (off a TRX 400, which switches 2 circuits between normally open and normally closed), and a battery pack.
I plan on changing the wiring, will have to revisit this, as it has been awhile since I looked into it, can remember having to make the DC circuit full floating (ie no earths to frame) as mixing the circuit with AC could have some strange side effects.

Glad to have you here Al. Thanks for all your help!

During my time off of work, when not being harassed by the wife and kids, I like to fix/repair/modify

I feel that this is a universal truth

I plan on changing the wiring, will have to revisit this, as it has been awhile since I looked into it, can remember having to make the DC circuit full floating (ie no earths to frame) as mixing the circuit with AC could have some strange side effects.

A floating ground setup is a good idea, I’ve seen good results personally by keeping AC and DC stuff separated in the harness.

If I’m reading your diagram correctly, it looks like you have two separate single-phase windings for lighting. A purely AC circuit for headlights and tail lights. And a DC regulated circuit for turn signals and brake lights. I wonder if you’d be able to retrofit a three-phase stator and rewire to consolidate everything behind the regulator.

Would you happen to have any pictures of your original stator / flywheel?

No pics of originals, but the factory stator only has 4 poles wound, i have a new one where all poles are wound, and a reg/rec to suit, outputs 200w if i recall.
Plan on a dc conversion (ignition circuit staying ac), change all lighting to LED except for headlight (did fit a Cyclops LED to the WR250 I had, was a brighter light, but not a better light.)
Have a LED flasher can to suit, will keep it a clean install without external resistors on the turn circuits.
With all LED lights (except headlight), relay and battery pack, it should be a solid electrical system, in preparation for the nEfi system.

Managed to get some time to fit the new stator today, looks like I was mistaken, the existing stator had all poles wound, although they looked a bit anorexic. 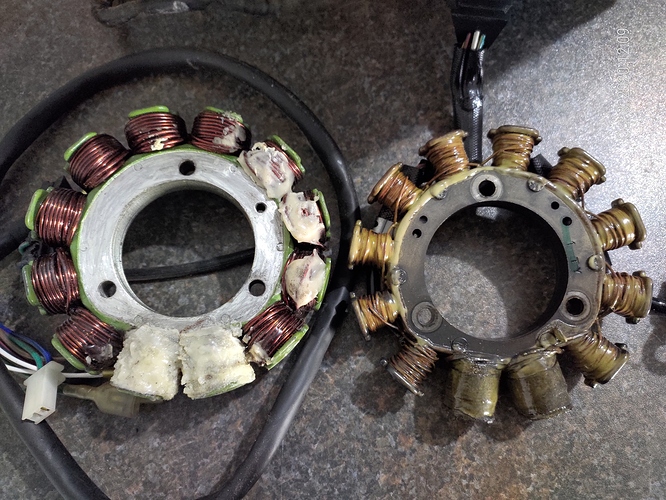 New stator on the left.
On the original stator, bottom right near the bolt hole, you can see where the winding starts, which is where the winding earths to frame, not really ideal or convenient to make it a floating earth, but possible.

I checked all the circuits on the new stator, and was stoked to find that it already had a full floating earth, so had a return wire for that circuit.
So I have 8 wires, 2 for the pickup, 2 for the ignition, which will stay AC, and then 2 pairs for my power needs.

After installing the stator, I decided to check the circuits again, and found that I now had a short to frame on a circuit, remove the stator again (the new one was an interference fit it seems, fun times.), to find this. 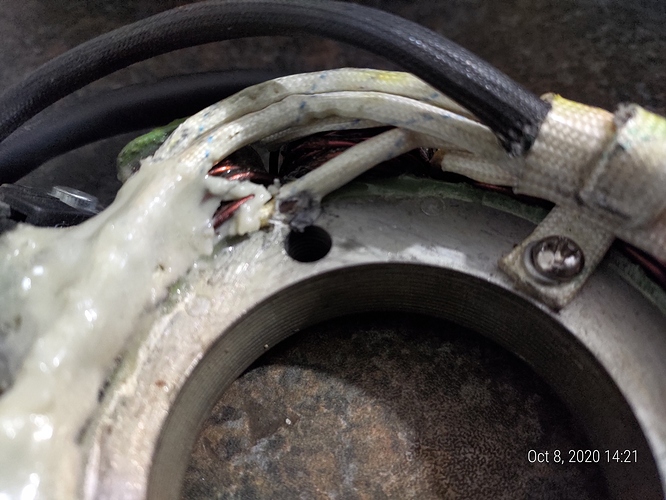 The side cover that it bolts to, has pinched the wire, luckily it hasn’t damaged it, just removed the enamel and created a short.
This could have had disastrous consequences the first time I fired up the bike.
Break off some of the snot sealing the wire, move wire, spray with some high temp paint to seal, refit. 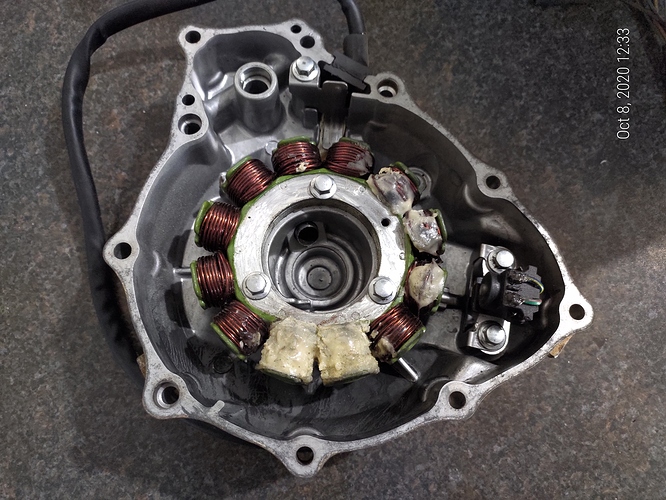 All fitted up, and all circuits test ok.
This should definitely put out more power than stock, as removing the cover from the engine took little effort, when refitting, the attraction of the magnets pretty much ripped the cover from my hand.

Here is a pic of the flywheel, showing the triggers, not what I expected to see, but since it can run a CDI, then nEfi should be fine. 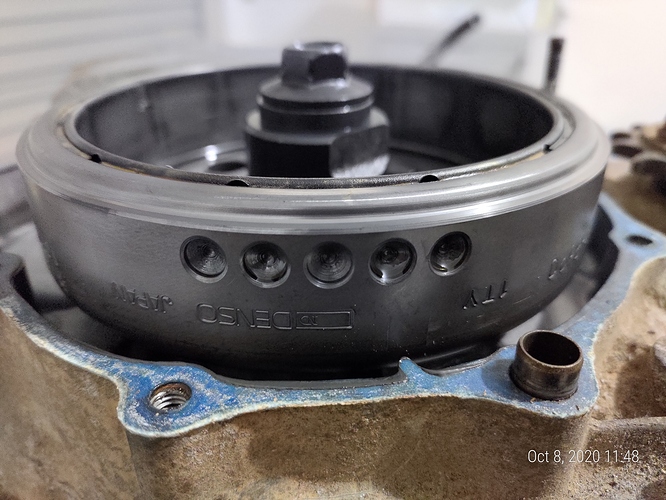 Well, in South Australia we had a 6 day lockdown due to a coronavirus outbreak.
Turns out the guy lied, so only lasted 2 days.

The upside was I got to spend some solid time reassembling the bike, as the wife couldn’t magically decide that we had to go somewhere with the family.

This was slow going, as I pulled the bike down a few years ago, and so had to reassemble things a few times to get them right.

First up was fit new headstem bearings, no vice made things interesting, but got it sorted. 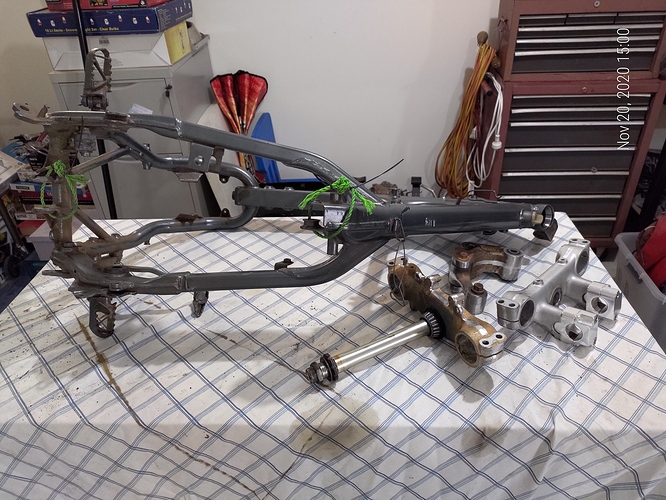 I had started to clean and polish parts, but this was when I had access to a decent workbench and buff, so sadly it will just have to be as is, polishing can be at a later date, I just want to fire it up again and do some riding. 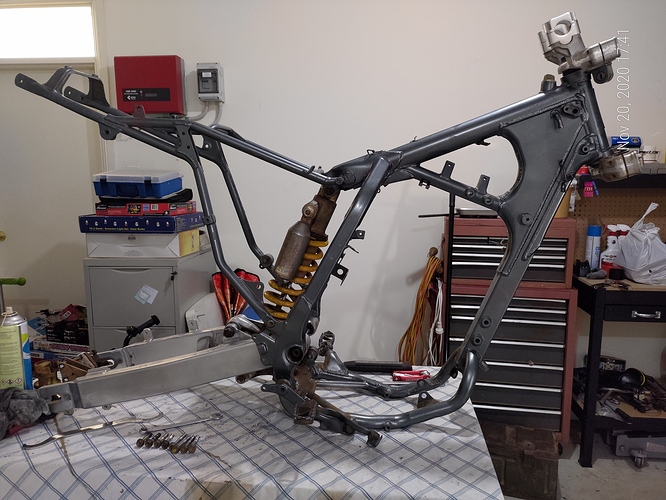 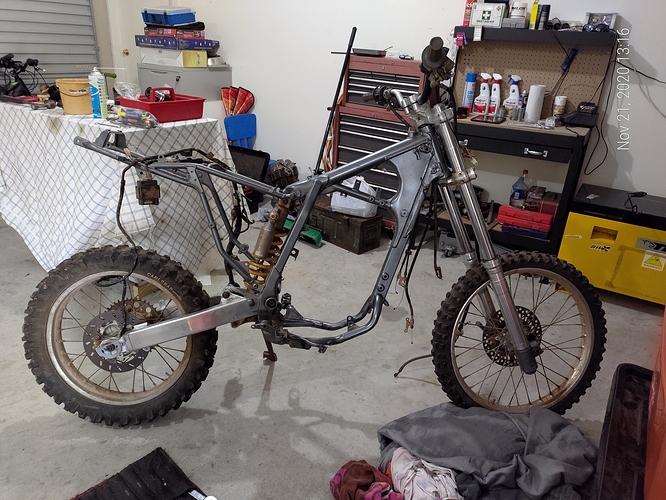 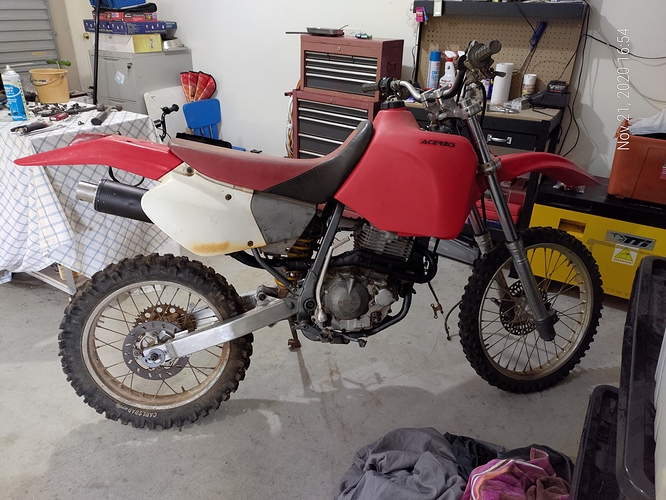 And actually looking like a bike, plastic, seat and tank are just sitting there for looks.
Even the wife commented that it hasn’t looked like that for awhile.

Still a long way to go, but now I am motivated.

Had done a few things to the bike, but not update worthy.
Got to spend a couple of days on the bike, decided on fitting the factory tail instead of a mx type. 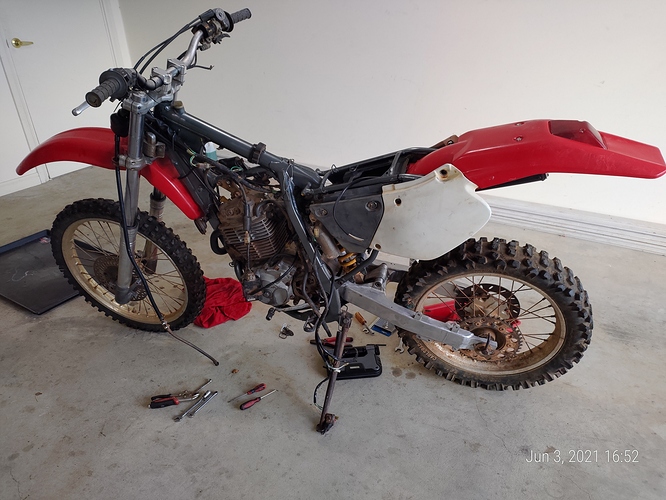 Opened up the airbox, the engine has been rebuilt, so is now 425cc, so bigger carb/throttle body is on the cards, and will have to modify the intake tract to suite. 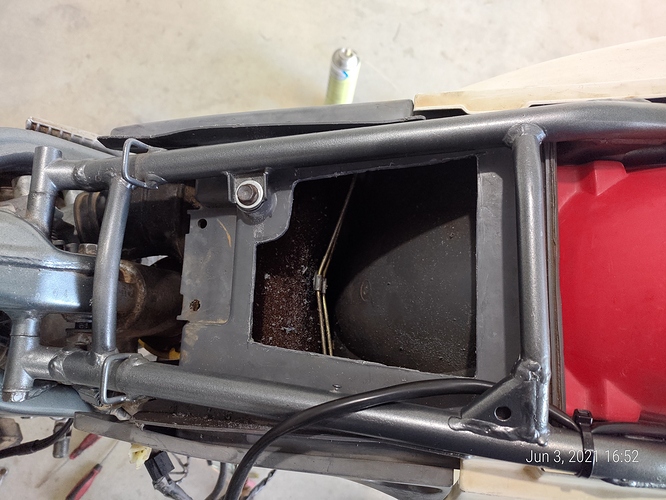 Assembled the new fuel tank, this thing is a monster, but not bad when fitted to the bike. 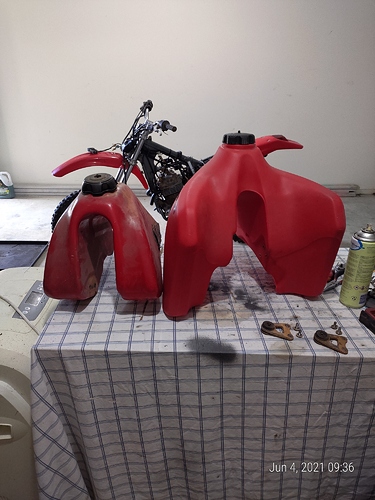 Had some oil from when I first got the bike, 9 years ago, still has the alfoil seal, so should be fine for now. 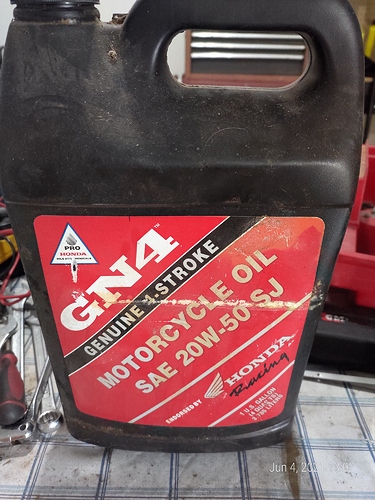 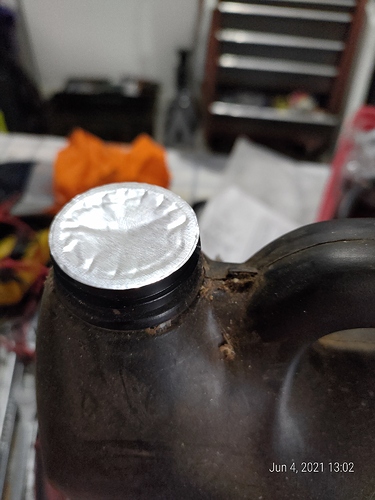 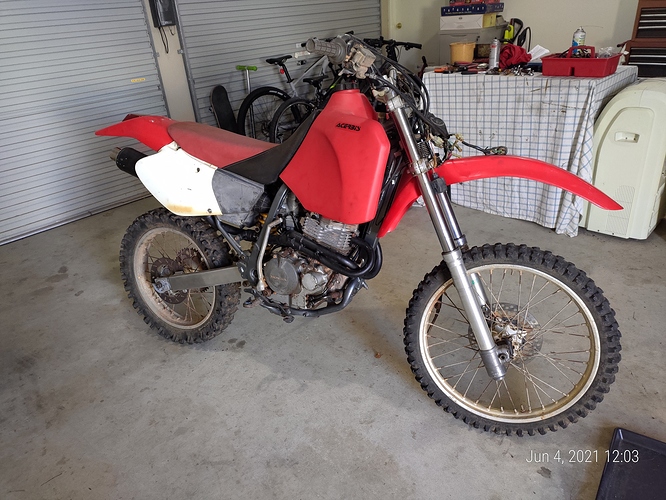 Friday I tried to fire it up, no go, the carb is in unknown condition.
Sat arvo decide to give it another go, it fired a few times then died, give it a few more tries, slowly starting to run.
After about 10mins of kicking it over, it runs and idles.
Not bad for not being started for almost 9 years.
Damn I miss electric start, but too much effort and price to worry about doing a conversion.

All in all i’m pretty stoked, now to finish assembly of all the other stuff, get it roadworthied and go for a spin.

Got some rewiring done, added a battery.
Have some 10w LED spotlights to add. Still need to modify the headlight wiring, and add an on/off switch, so if it’s not running, I can still have park lights on. 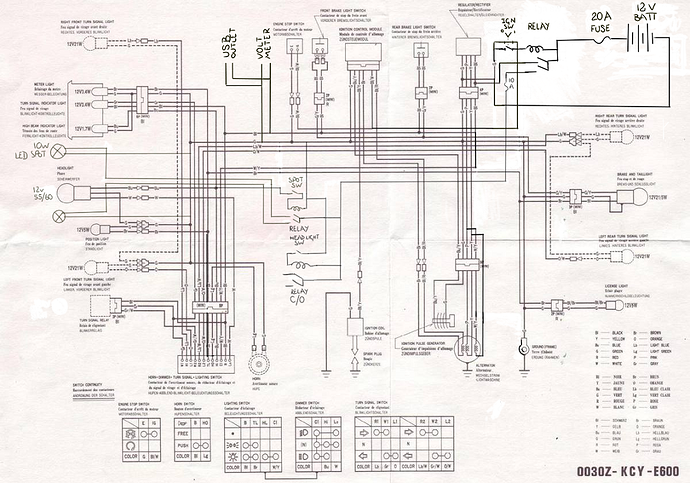 Decided to keep the earth’s, as it is all DC now.
Found a performance coil in my box of parts, will see if that gives me an even better spark.

Moved house, so no updates.

Really want to not have the headlight on a switch, so spoke with another auto elec at work.
Told him I wanted to have the headlight come on when the engine is running, he suggested a zenner diode.
So will pair a zenner up with a latching relay, so that the headlight will be on when started, but stay on until battery power is disconnected.
Have found some 13v zenners, although they are 1w, so will try and find some that are bigger, or run a few in parallel.

Have been doing some house Reno’s, so work on the bike has been limited.
Lots of die grinding to get things to fit due to non genuine parts.
Pulled apart the harness again, to add the tacho pick up, and change a few things.
Hope to get some more work some when I get back from work in a weeks time.