I live down in Australia, I built this experimental aircraft that uses a VW beetle 4 stroke boxer 1600cc engine. Currently it runs a single slide carb with wasteless spark ignition and would be perfect to convert to EFI. It’s experimental class would allow the conversion to fly legally and I think allowing home builders to add on EFI would make a lot of these engines safer and less temperamental. I previously converted this to EFI with a Halltech unit but found it needed to many inputs and was heavy.

Let me help by making this the first NanoEFI aircraft!

Welcome to the forums, Bodie.

This looks like an awesome bit of kit!
I’ll let Travis chime in on applicability, though I’ll express concern that at least in some jurisdictions in the States that making a powertrain change like that may require some creative licensing. Since you already have an experimental classification for it, I’d think you’ll not have much trouble.

Thanks! Litigation is a bit different in Australia, however this aircraft since this aircraft is amateur built I can put any powerplant in it and fly it at my own risk. In saying that, after an EFI mod.it would get extensive ground running before taking flight.

I’d love to see NanoEFI in the air. A member from the old forum with a four-cylinder aircraft mentioned needing multiple (4) throttle bodies, four separate ECUs, sensors, pumps, etc. for strong redundancy. Each system managing a different individual cylinder. His goal being that in case of major injection-related failure, only one cylinder would lose power.

Do you have a similar setup and needs in mind?

I previously converted this to EFI with a Halltech unit but found it needed to many inputs and was heavy.

What kind of problems with too many inputs were you having in specific? I appreciate feedback like this about experiences with other EFI systems. Helps to avoid similar pitfalls. Thanks!

All lights port aircraft that utilise EFI at present only use two fuel pumps for redundancy. The way the manifold is running now is a single carb runs into a left and right intake manifold. That manifold feeds the two cylinders on each side. I was going to place an injector on each cylinder bank so essentially one injector feeds two cylinders. This particular aircraft is built under what we call amateur built. It basically means you can build and fly what you want at your own risk. With that in mind a lot of these aircraft fly with old 2 strokes and often end up in a field when they fail. In this case the VW is pretty bullet proof and you never fly these aircraft in an area that you can’t land if you have a system failure.

I’m looking to utilise the distributor (cam) drive with a trigger wheel to drive the four injector pulses per 720 degree and either leave the wasted spark setup on there or use nano EFI to drive the two coils as well.

It’s a fairly simple system I have in mind and the aim would be to utilise the wide band AFR to operate in closed loop above say 1500rpm.

The problems I was having with haltech is that I had an older box and could only use crank position and the software was a bit limited. Ideally I just want to use MAP, Intake air temp, AFR, TPS and trigger/rpm as inputs.

Looking up firing order info for the VW online, is this the correct chart for your 1600? 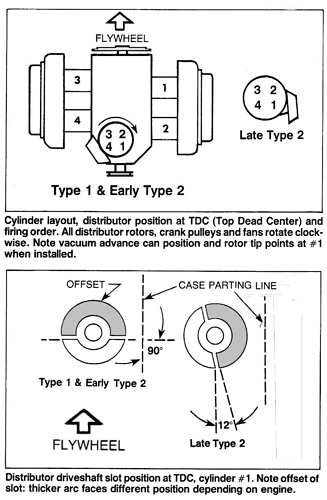 I’m looking to utilise the distributor (cam) drive with a trigger wheel to drive the four injector pulses per 720 degree and either leave the wasted spark setup on there or use nano EFI to drive the two coils as well.

This should work well. If I have the right chart, the vacuum advance would need to be disabled.

As for ignition, NanoEFI only has a single CDI ignition channel onboard. I’m a single cylinder knucklehead and have only limited personal experience with distributor systems overall, so this may be out there (or not, I don’t know). However, I’m curious if the distributor could be used as a window switch to multiplex nEFI’s single ignition channel to multiple coils.

I think the ‘single CDI channel’ thing is a non issue if the current ignition setup is working on the target engine. While I suspect that one would likely get an increase in efficiency coupling the EFI to the CDI, I think that efficiency increase would be relatively small compared to what is gained by converting from carbs to EFI.

Lessons I have learned the hard way from years of mistakes include the classic, ‘if it ain’t broken, don’t fix it’.

I greatly suspect that the electronics of the EFI system adjust much faster than the mechanical advances of the stock ignition, so optimizing fuel alone shouldn’t be too much of an issue.

That’s just a guess as I’m evolving my boomer brain to new ideas.

For example, the wasted spark EFI on my bike works just fine. It has a mechanical advance, a couple of hall effect sensors on the crank, two dual lead coils and two (what they call) spark units. Pretty much as bullet proof as it gets.

It gets two (one each) pulses from the hall sensors per revolution, one (or maybe both) might work as an EFI trigger if the advance doesn’t mess with the fueling.

If the advance would screw up fueling, then adding a crank position sensor shouldn’t be very difficult.

I imagine it would work about the same for Bodie’s VW aircraft engine.

A fuel-only installation would work fine. Having the ECU manage the ignition side of things is optional.

However, if ignition control is desired on more than one cylinder (or two cylinders in wasted mode), some method of routing the single ignition channel will be necessary.

Hey Travis, yup that’s the correct timing, I gutted a distributor and mounted a small trigger wheel inside with the hall sensor. There is no advance etc anymore just a trigger wheel connected to the cam output. The stock crank wasted spark system can stay connected, it’s automatically advances according to rpm so nanoefi will just control the two injectors and the amount of fuel. Pretty simple at this stage!

Hi Bodie, if you are planning in only using 1 injector per side (bank), you will need to ensure that all fuel is injected after inlet valve opening and finished before inlet valve closing. The bank has an odd firing sequence as in 4-3 and the 2-1 on the other side. This means both intake strokes on 1 side will take place in the 1 revolution, then the other bank in the other revolution. If the fuel injection duration is longer than the inlet vale opening, one cylinder on each side will be running rich and the other lean. You will also need to place the injector so that all fuel goes to the cylinder on the intake stroke (do you have single or dual port heads?).
Cheers, Thomas (Mackay Qld)

Correct, I’m about to install a speeduino board that has 4 injector channels. The way to solve the problem is to go full sequential and put the first two channels on one injector and the next to channels on the other injector. For nano EFI I’d have to use two injectors before the manifold splits and have them fire every 90 deg of cam revolution.