Good news everyone: I decided recently to change directions away from the custom throttle body w/ integrated ECU covered in previous updates. At the time, smaller throttle bodies seemed nearly impossible to source so a custom solution felt necessary. Fortunately, that’s no longer the case. Throttle bodies small enough for powersports engines are becoming more readily available, making life a lot easier for us. Going this route also means that the ECU will not be integrated, instead it will be potted in its own sealed enclosure like you’d normally expect. So, heads up on that.

With that being said, let’s take a look at the throttle body. The throttle body shown here is 28mm. A 34mm version is also available, identical in features and approximate size. 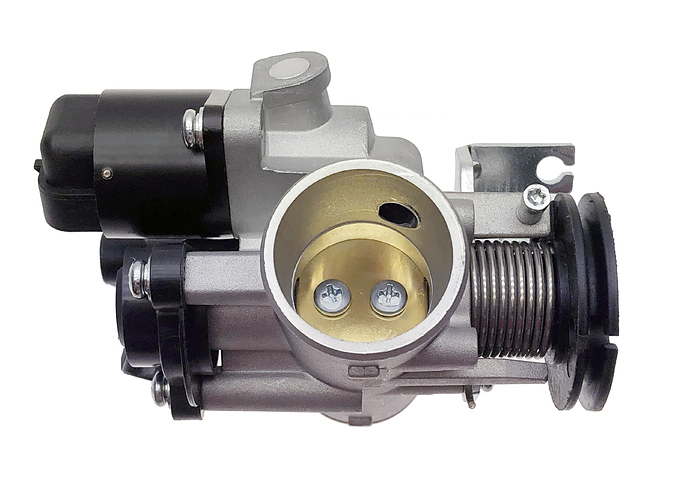 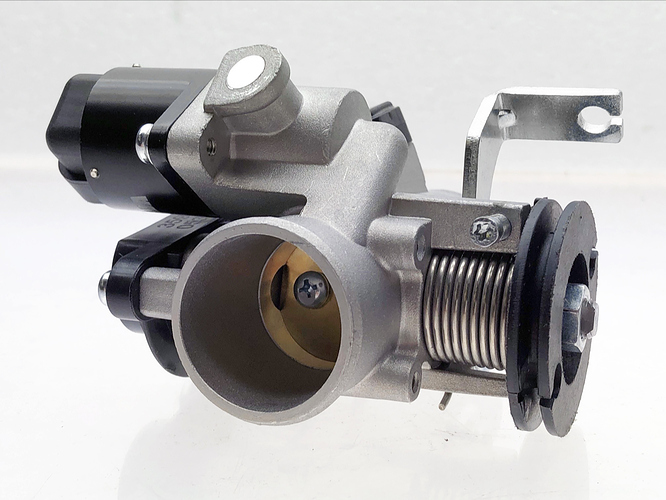 I think most are probably familiar with TMAP and TPS sensors. So I won’t say much about those.

IAC Stepper Motor
Coming from the carburetor world, you may not know about the IAC feature though. “IAC” is short for “Idle Air Control”. It’s a method of controlling idle speed via the ECU, rather than dealing with the old wallowed-out idle speed screw you’re used to cursing at every time the ambient temperature rises or falls outside.

If you’re a powersports rider, I’m sure you’ve adjusted your idle screw just right while the engine was cold after a startup, only to see the engine start idling high in a few minutes after the engine warmed up. On some engines this is particularly an issue. Eventually you just learn to live with it. However, having IAC control means that the ECU will make those idle adjustments for you and keep idle at your desired setting specified in Airtune. Warm or cold, it’ll help keep your riding with less fiddling.

The nanoEFI ECU doesn’t have native support for idle steppers yet, I plan to make it available as an external module in communication with the ECU over I2C/TWI.

28mm Throttle Body (with GY6 Intake Manifold attached)
*Note for GY6 owners: The intake will be machined to add the injector seat. 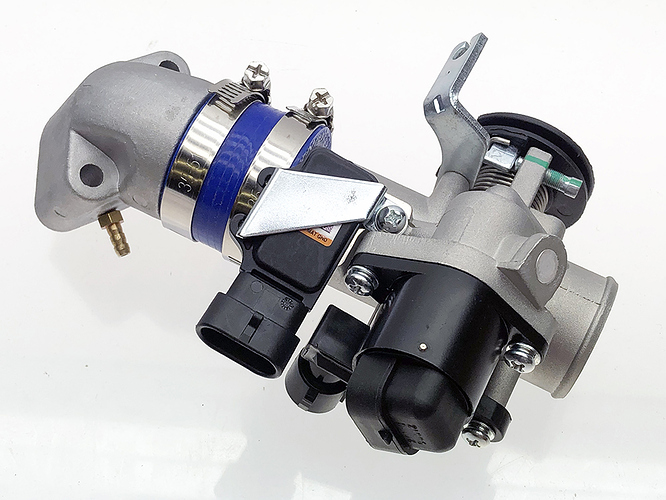 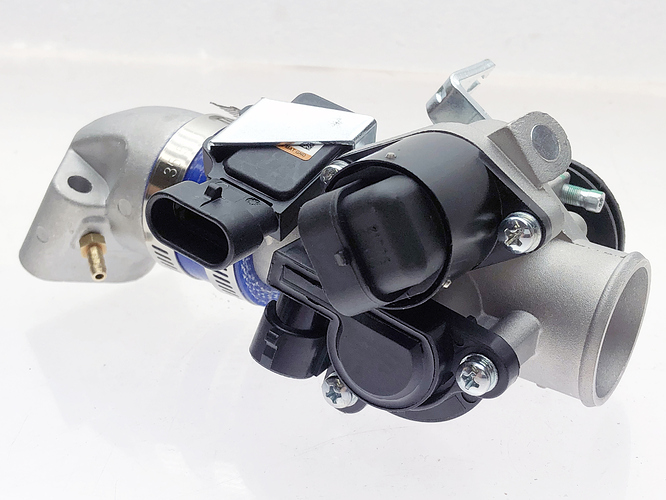 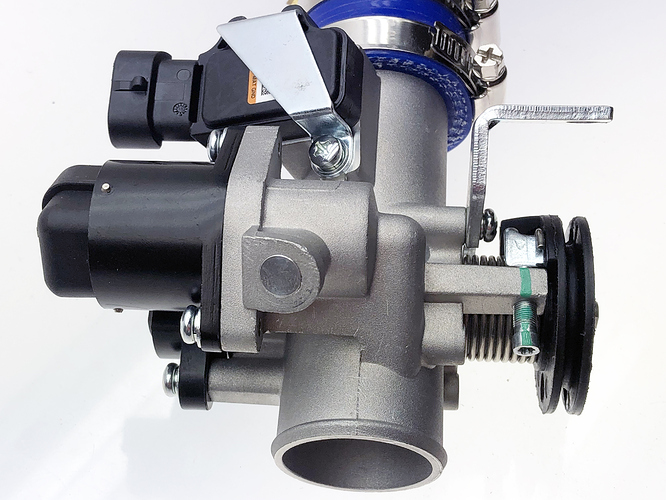 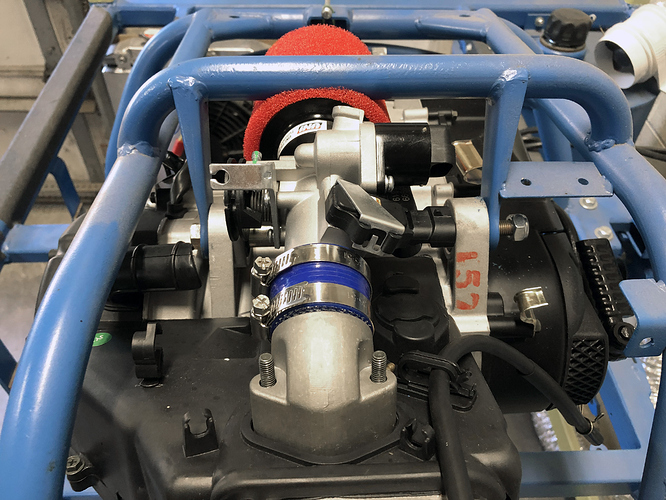 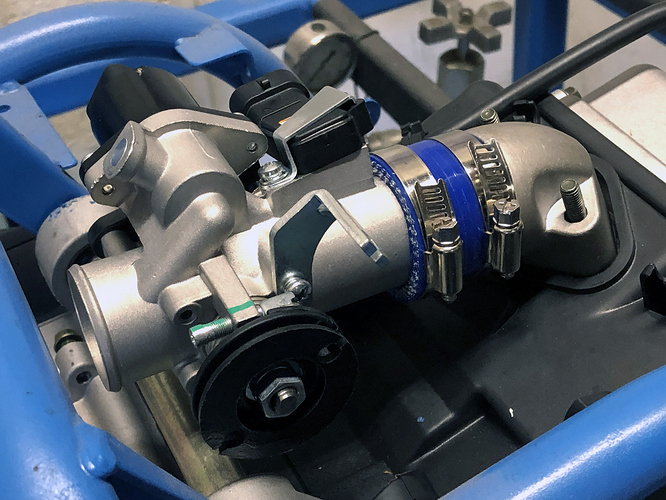 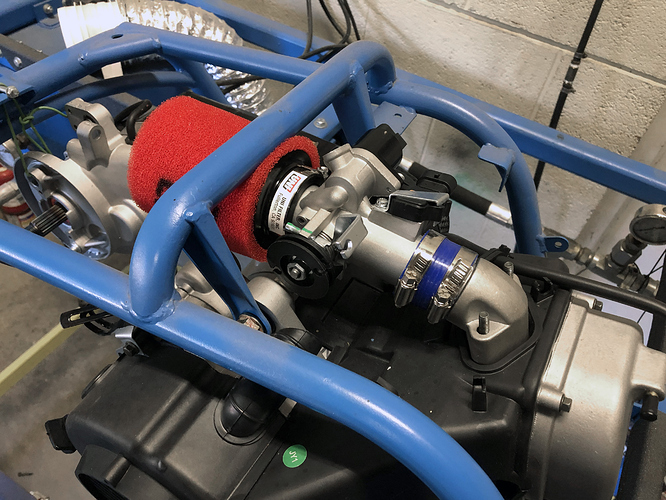 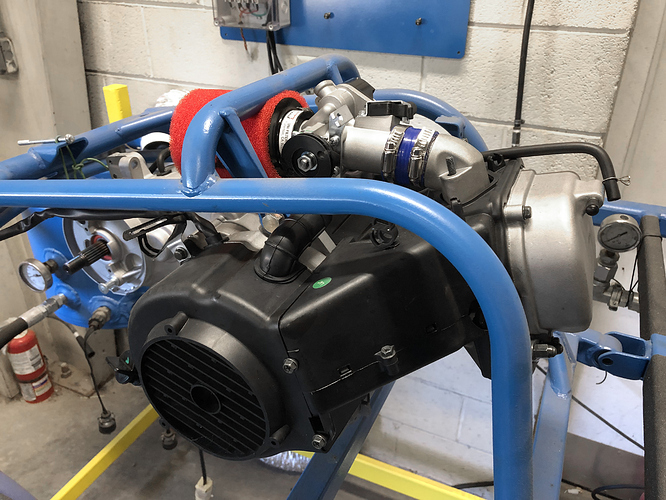 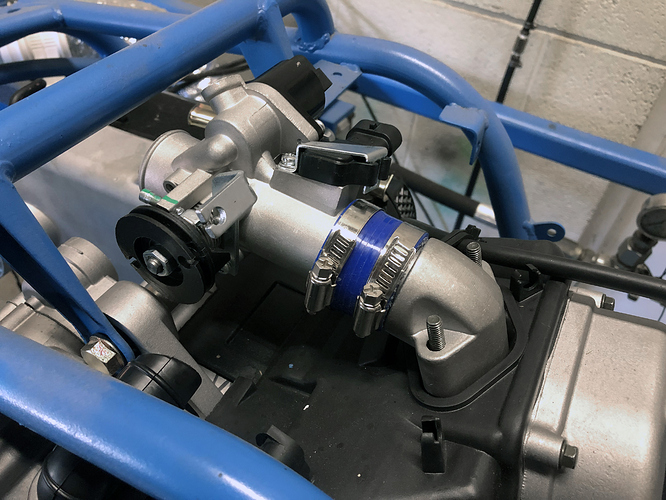 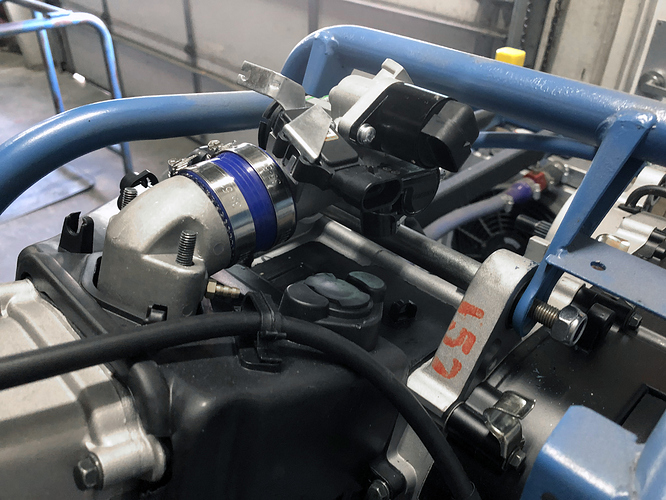 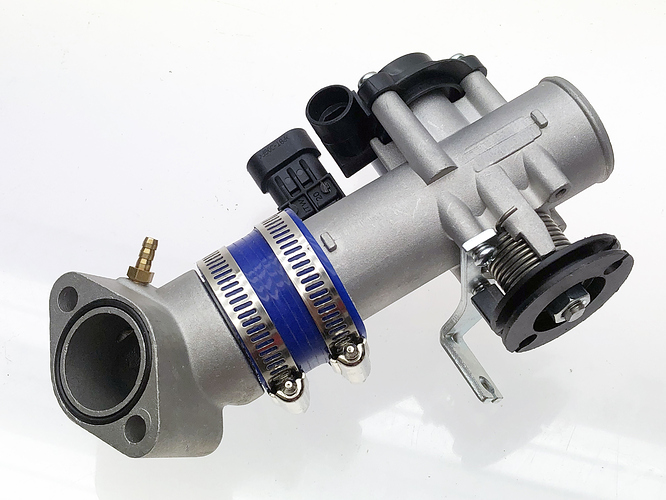 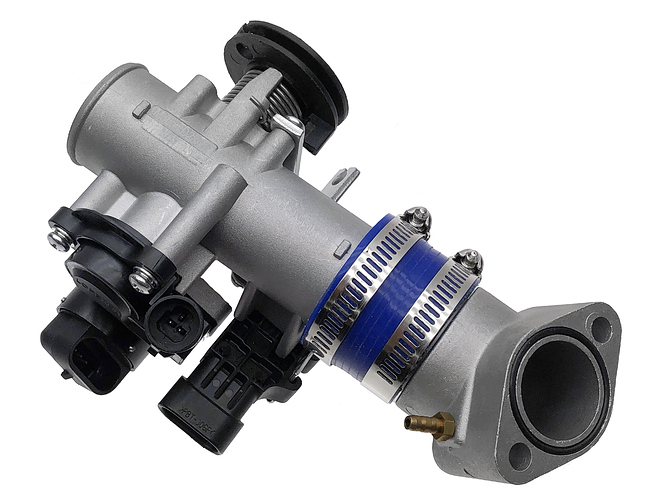 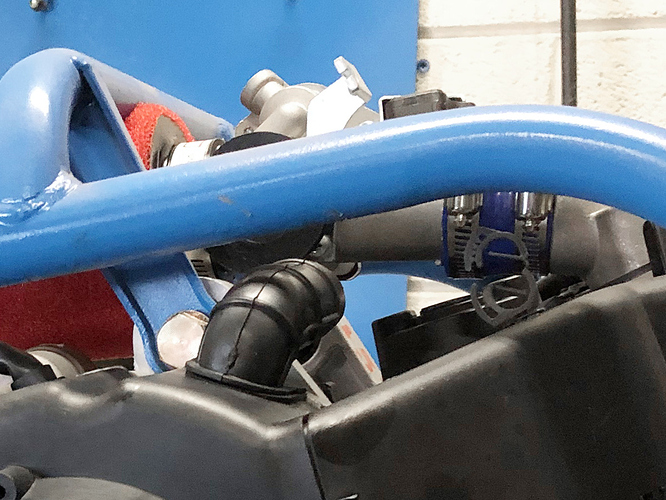 If you like this and want to see more, hit the like button below and be sure to leave a comment! Please register and log in if you haven’t already, it just takes a minute!

I only found this site a few days ago and I am psyched. So many possibilities and it’s good to have found some fellow carb haters.

I have been going back and forth for a long time about how to get rid of the terrible 4 carb setup on my 1982 Honda CB900C. I’ve considered going from 4 carbs to 1, maybe with an auto or a Harley carb. Ideally, I would love to rig up an EFI system.

On that front, I lean towards throttle body but can see the advantages of using the carbs as throttle bodies.

This, I like a lot. The integrated TMAP, TPS and IAC are a huge benefit compared to integrating those systems on a setup using the stock carbs as ‘dumb’ EFI throttle controllers. I think my carbs are 32mm so I think the 32mm version of this might work.

It would be a tossup which would be more effort to adapt to my '82 Honda CB900c.

Both systems would require significant mods to intake system (more, I think for carbs). Both need a high pressure fuel pump, new wiring.

I could handle either challenge, I reckon. My lack, is expertise and supply and that’s where this site comes in.

Do you expect to be able to source additional sizes? Your system would be interesting to several in dual sport motorcycles, were existing throttle bodies are between 32 and 45 mm for 350-650cc equipment.

I’ve only physically had my hands on the 28mm version so far, so I’m not able to confirm exact dimensions of the others yet. But almost all sizes have the same sensors and idle stepper motor.

I’ve seen some efi kits on ebay, amazon and ali express, that look interesting. Generic EMC with fill in the blank software.

My Honda has 32mm carbs so I’d probably go with a mid 35ish mm throttle body, and try to rig a manifold, if I went with single throttle body.

Ebay seems to have a bunch of motorcycle efi hardware, including multiple throttle bodies, for cheap, which would be better than trying to rig a TPS to my carbs. Lots of BMW 4 throttle body units. I’m looking for schematics to figure out what goes where.

Farting around with my carbs is getting so damned old.

If we were using a parallel multi-cylinder arrangement (based on what i understand of project goals atm, let’s say a parallel twin) are there any thoughts on how the throttle bodies would be ganged, or should the approach look more like a manifold of some sort with a single throttle body?
V engines are a little easier as most of the ones i’ve seen seem to already have some kind of cable based throttle ganging. This would be harder to accomplish with cabling on a parallel engine, right?

I think there are a bunch of options for in line bikes, and which way to go would depend on what’s available and how much work one wants to or can, do.

You could use the carbs as throttle bodies and rig a throttle position sensor to them. That requires farmer rigging injectors, intake air temp and MAP sensor.

There is the single throttle body with TPS, IAT, MAP, idle speed control. That also requires fabbing an intake and injector ports if they aren’t on the throttle body, something like what @TravisNano posted up thread.

Then there’s something like this which seems to have almost everything in one unit except map. 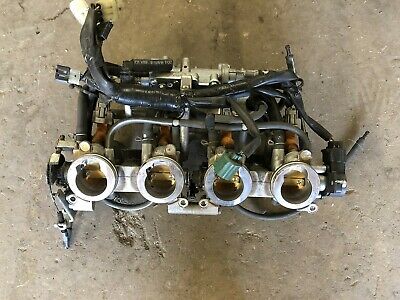 The manifold would be intake boots which could be rigged without too much trouble, I think, and you probably need a map but that’s easy.

Any of these still need a ECU and high pressure fuel pump.

There are also more complete kits that contain most of what you might need but you are working with unknown quality. It’s coming from China so if you get it wrong, then you might be hooped.

It looks like he’s also come a long way with ‘fly by wire’ control, which is definitely interesting.

EDIT: I found a manual for the Yamaha FZ6R and the throttle body pack comes with 4 throttle bodies, TPS, IAC, and what they call Intake Air Pressure Sensor. Other than fabbing up some intake boots to mate the pack up to my head, getting a fuel pump/pressure regulator, all I think I would need would be an ECU.

If we were using a parallel multi-cylinder arrangement (based on what i understand of project goals atm, let’s say a parallel twin) are there any thoughts on how the throttle bodies would be ganged, or should the approach look more like a manifold of some sort with a single throttle body?

In terms of what the NanoEFI ECU is capable of, you can go with either arrangement. The ECU supports both modes natively, so it’ll come down to your preference in the end.

You should see better performance and tuning potential from the dual throttle bodies and dual injectors run sequentially. Or on the other hand, if you’re just looking to kick the old carburetor and get to riding with the least technical headache, a shared manifold and single injector would help keep things simple.

If asked a year ago, I’d say “definitely shared manifold” due to limitations that existed back then. But things have evolved quite a bit over the last year to make the system more versatile.

I’ve seen some efi kits on ebay, amazon and ali express, that look interesting. Generic EMC with fill in the blank software.

I think I’ll pick one up at some point and check it out to make a detailed comparison article. Of course I’m biased, but it would still be good to get more info out there for folks to consider.

Right now, I’m kinda leaning towards that Yamaha FZ6R 4 pack. It looks like it comes with TPS, IAC and injectors. That bit on top looks to be a fuel pump. I reckon I would need a MAP and maybe IAT, and of course a EMC.

I found a couple you might want to examine out of curiosity. They look like the same thing. 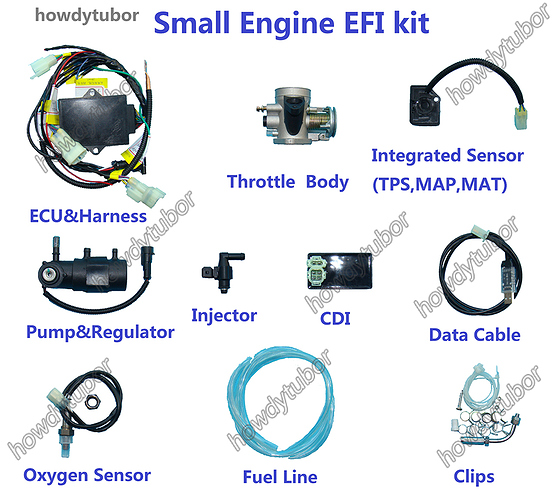 After looking into it more, the Yamaha FZ6R throttle body pack seems about perfect, and for cheap, especially considering everything that comes with it, all the basic sensors except IAT, and it includes injectors.

To keep the wiring, programming and rigging as simple as possible, I would be inclined to start with an open loop system and stay with the current CDI ignition system. I am experimenting with coil on plugs from a Honda (can’t remember which one) staying with the wasted spark system and running 2 pairs of coils wired in series to the original wiring.

All I need is an ECU and lots of coffee.

Hi Travis! The throttle bodies looks great. As soon as you have them or can get hold of the measurements please please publish them so we can make the necessary preparations. I also need the c-c measurement for the manifold screws so I can make an adaptor. Keep up the good work. Janne

Joekanuck, what is the spacing between your carbs? The xs650 carbs and kawasaki ex650 throttles bodys are 120 mm apart making it nearly identical. British twins are a little narrower at 110 I think. But the new triumphs have a dual gang throttle body as well. It takes some searching but you can find modern systems with the same gap.

I’m looking to add this to my 2005 ps250 big ruckus. I have a 1984 volvo with a turbo LS running a megasquirt 3 microsquirt combo for the engine/transmission. That said, I really want my scooter to have fuel injection.